Nuclear Verdicts and Social Inflation Are on the Rise 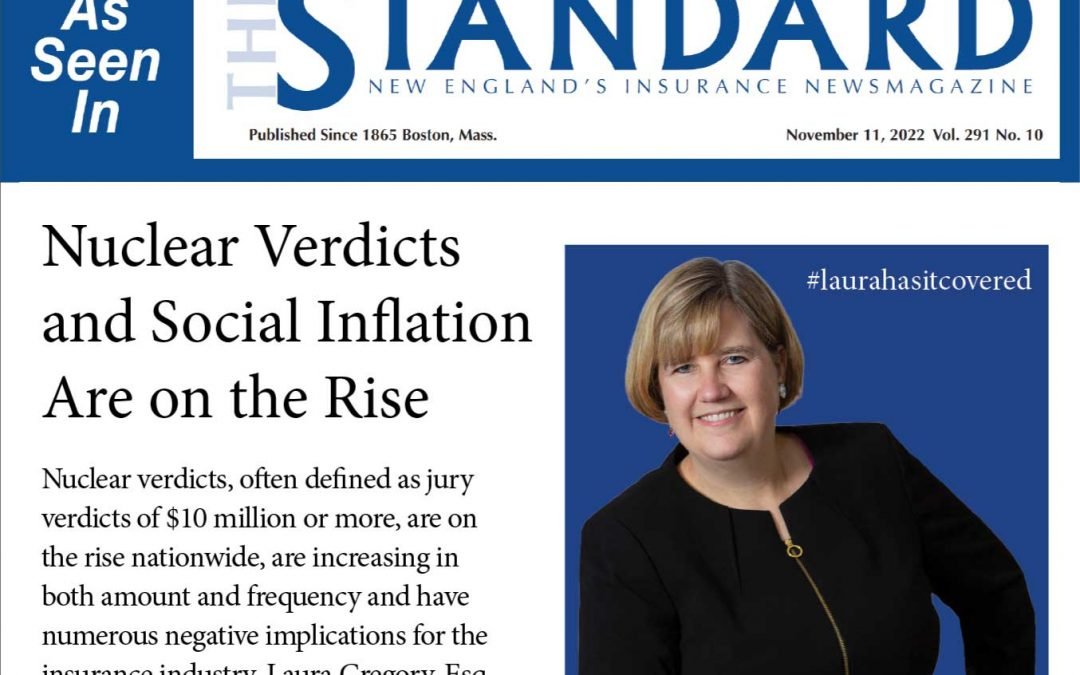 BOSTON — Nuclear verdicts, often defined as jury verdicts of $10 million or more, are on the rise nationwide, are increasing in both amount and frequency and have numerous negative implications for the insurance industry. Laura Gregory, Esq., CPCU, partner, Sloane and Walsh LLP, and Tim Fletcher, Esq., CPCU, vice president, senior emerging issues specialist, GenRe, discussed the emerging trends of nuclear verdicts and social inflation and their impact on the industry at the Boston CPCU Society Chapter’s I-Day.

On Sept. 19, 2022, a Massachusetts Superior Court jury returned a $1 billion verdict against Philip Morris over the role the tobacco giant played in the death of a long-time smoker from lung cancer. One billion dollars was awarded in punitive damages. The compensatory damages consisted of $2.5 million for pain and suffering, $514,000 for reasonable medical bills, $1 million to compensate her spouse; $2.5 million to pay her daughter and $1.5 million to compensate her son. Philip Morris plans to challenge the verdict, and Gregory expects the jury award to be decreased. However, she explained that while these nuclear verdicts often receive enormous media coverage, if the figures get reduced due to statutory caps or settle after trial, they do not receive an equal amount of attention, leaving the public unaware that the case was resolved for much less.

A related concept that is receiving a lot of attention in the insurance industry is social inflation. It refers to the trend of rising insurance costs due to increased litigation, plaintiff-friendly judgments and higher jury awards. Several social, legal and economic factors contribute to social inflation. But what are the main causes and what does this trend mean for carriers?

Among the societal shifts is that wealth in the U.S. has become more concentrated than it was 30 years ago. The recession of 2008 made it difficult for many people, particularly members of the millennial generation, to make economic gains, according to Fletcher. In many cases, it left the public with a great deal of cynicism and mistrust about big business, which figure into some of these jury awards.

Another key component of social inflation is emerging risks, such as toxins and microplastics. PFAS — short for per- and polyfluoroalkyl substances — are a large group of chemicals that make certain products nonstick or stain resistant. They are often referred to as “forever chemicals” because they do not break down and can lead to widespread contamination. “We’re obviously very concerned about what these forever chemicals might mean to the industry,” said Fletcher. He noted that there is a lot of attention paid to these types of emerging risks from a regulatory standpoint.

Fletcher expects microplastics to become a big topic of discussion in the coming years as well. “What happens to microplastics when they break down? Do the leaching chemicals have adverse health consequences?,” he asked. “The amount of scientific research going into microplastics is very, very large. That’s something that we need to watch out for going forward because there are obviously coverage ramifications.”  (continued)